You'll need to find were Everquest is installed on your particular machine. Typically it will be in a folder with a path similar to

but there can be variance depending on what EQ release you used to install EQ. If you didn't use the installer, well then, you're on your own for finding. Go to wherever you put it.

The above link will download a zip file. Windows XP has zip support built in. Previous versions of windows will need to use a third part zip application.

In the zip, you will find a folder, and a single file.

The folder needs to be copied to:

(There will be two folders there already, one named "default", the other named "shared". Possibly others if you have already created a custom audio trigger set.)

The file needs to be copied to:

AND must be renamed. Change "CharacterName" in

to, well, your actual character name.

For example, if your character is named Icecream, you will need to rename that file to be named:

If you installed while windowing out of EverQuest, EQ must be restarted for the changes to appear! Zoning / reloading the skin will not do the trick.

Go here and click the [INSTALL] button. Let it install. After a few seconds to a few minutes (depending on what you already have installed), a nice new Audio Trigger Patcher will appear on your Start menu. Run it. It will download all updated triggers, put them in the right place, and modify whatever files need to be, uhm, modified. Thank you to Cicak for testing it for me (again). 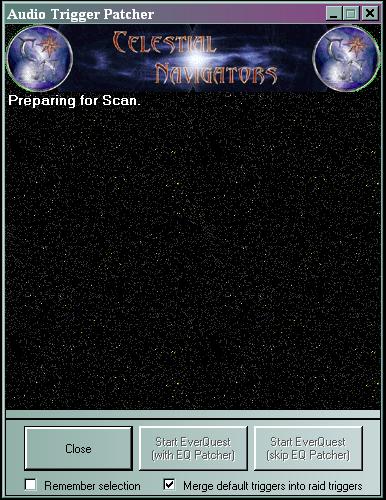 Regardless of the installation selected, you'll need to select them in game.

You can also assign a hotkey to this window via the EQ Options screen. (It has no default key assigned by the EQ developers.)

If, however, you use the automated installer, it will assign alt-s to this window for your convenience and inner joy. 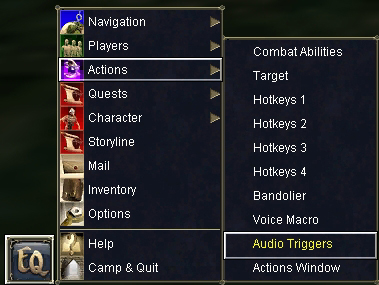 Once you get the audio triggers installed, you'll need to select them in EQ's Audio Triggers window.

Open the Audio Triggers window. Under Trigger Set in the top right hand corner, select cnraid from the dropdown list. Once selected, the trigger patterns and sounds will appear in the main window panel. 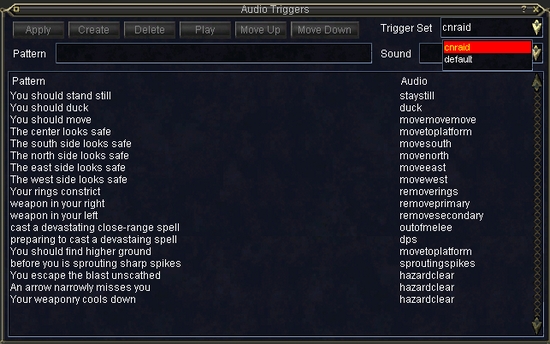 by Szork
Everyone please make sure to get these audio triggers installed! Please ask for help if you need it.

by Ommina
As some have noted, I've made many changes to the patcher. With these changes, the especially old versions of the patcher will no longer do anything useful (kinda like Erwin).

Under normal conditions, the patcher would update itself automatically, but due to a technical condition that is far too mind-numbingly complex to explain here, that automatic update process is no longer available. As such, if you installed the patcher before the beginning-ish of January, you will probably be using the non-updating version.

Run the patcher and check the series number. If it is less than 1.2 (or missing entirely), you're one of the lucky ones that has the retired version. If you are, remove the old version (Start Menu -> Control Panel -> Add or Remove Programs -> "Audio Triggers" -> Remove), then click the [install] button on the installation page again. This will install the current version and will, I sincerely hope, be the last time you'll have do to so.

The principal change with the new version is the separation of the triggers out of cnraid and into other sets, based upon expansion. "cnraid" was just getting too large for its own good, and was contributing to lag for some players. As we take on new content, the problem, of course, only gets worse. Many will have noticed the pause when the cnraid set was selected as the wav files were loaded into memory. By dividing them into unique expansion sets, I'm able to cut in half the number of triggers in memory at any time, which is a Good Thing. Further, it allows me to return triggers that I had removed to make space, so they will be available should somebody want to take on older content.

Second, the changes let me include the character's name in the trigger - a useful trick that will be used in the upcoming Vergalid Mines raid (Saturday May 03).

by Ommina
Minor update for Crystallos event that we may or may not try tonight. (And it's six counters, not eight.)

by oneyedranger
Man there is a huge time difference between Afghanistan and the U.S.

Some triggers in Seeds for later. Rejoice! The duck emote it back. In fact, so is the whole Trial of Foresight! (Yes, I spelled 'trial' wrong in the patcher notes.)

Also - with this post there is a change to the format of the zip file.

In theory, those using the zip should be able to just drag the two folders into the root of their EveryQuest directory, and the files will be distributed to their appropriate locations. ini files will still need to be renamed though.

by Ommina
Very minor update - inclusion of the "move to the wall" noise for the ice2 dragon.

Showdown at the Crystal Core

Resampled the FoS3 / Bloody Kith sounds so they (hopefully) won't have an extra 'click' sound when playing within EQ.

Pallorax - pretty much optional, but I felt talkative.

Mindshear - 'hazard clear' pwing when hit with 'wave of' effect. This, hopefully, can be used as an indication that the player can return from being targeted by an AE.

by Glauri
For the first Tower event, with the directions, at least on my system the beginning of the directional command is clipped. So, I hear "<mumble>west!" etc.

Any chance for an upgraded recording?

Glauri wrote:For the first Tower event, with the directions, at least on my system the beginning of the directional command is clipped. So, I hear "<mumble>west!" etc.

Any chance for an upgraded recording?

I think Derdarr did something to the files.

I'm going to redo all four directions to add a brief "don't touch the wall" reminder. Is it the sound not playing correctly, or the mushroom not enunciating as well as he should?

by Glauri
The shroom was enunciating well enough, but the first syllable was clipped and unintelligible. If there was a half second pause after the start of the recording, and before the first spoken word, it would be just fine. Good thing we all speak shroom!

Glauri wrote:The shroom was enunciating well enough, but the first syllable was clipped and unintelligible. If there was a half second pause after the start of the recording, and before the first spoken word, it would be just fine. Good thing we all speak shroom!

The clipping is only happening with the four mindblight directional triggers?

by Glauri
The clipping is only happening with the four mindblight directional triggers?
Yes Obi-shroom!

o Changed Mindblight triggers to include a warning about running into the wall.
o Added Trophy Room trigger warning when adds are about to spawn.

(and I'm still about a dozen triggers behind.)

by Ironbeans
WOW I am an idiot!

The link at the top for "download here" clicks and reloads page... Duhhh

Got them from first page.... I hate sharp IQ droppages

by oneyedranger
Omm tnks lot for the triggers I am just waiting for my machine to download them to.

by Ommina
Updated Feb 10. And I'm still behind.

1. Move Everquest out of your Program Files directory. Move it to root ( C: or D: or whatever drive letter) and a new folder.
Example: C:\everquest\MY_GAME_HERE
a. To do this find your everquest directory and RIGHT Click it.
b. select CUT
c. go back to C: or D: and right click.
d. Select New Folder and name the new folder whatever you want (Everquest works)
e. Open the newly created folder
f. Right click in it and select PASTE
g. Everquest should now be move out of the Program Files directory.

2. Turn off UAC (User Account Control). This feature is put in by Microsoft as a security tool to play big brother to you and your computer. It however does seriously screw up how some software runs. If you are worried about getting some malware or just want it on, re-enable it after audio triggers installed.
a. To turn off UAC, first go to control panel.
b. Select User accounts. (you may need to organize your control panel by icon).
c. In user account look for a line that says "Change User Account Control settings". CLICK IT.
d. WINDOWS 7 - The UAC windows opens. You should now see a vertical slider bar. move it all the way to the bottom, turning off UAC.
e. WINDOWS VISTA - Uncheck the Use UAC to help protect your computer box.
f. Click Apply, and reboot your computer.

3. Now that UAC is off and you've rebooted your computer, lets Uninstall any previous failed Audio Trigger installs.
a. Open Control Panel look for "Programs and Features". CLICK IT.
b. Scroll down / up / any direction till you see "Audio Triggers" the Publisher will be Celestial Navigators.
c. Click it and uninstall.

4. Now reinstall Audio Triggers from CN's web sight, and you should be good to go!

Just edit the file with notepad and put the proper eq file path in the file..

by oneyedranger
yes, thanks tandt I played around for a while until I got the installer to work. Thanks for the post.

Anniversary - Steel Behemoths. Q&D "to land on <character>" just to get it out there.

This one makes use of the character-name replacement of the patcher to slot in the actual character's name. Zip users will need to edit it by hand after.

by Goofydoofy
Hmm, I ran it but it didn't say it installed any additional triggers.

by Ommina
It did - I reused a previous trigger, so there wasn't anything to download. It's behaviour is a bit confusing in such cases, since it looks like it did nothing at all.
All times are UTC-08:00
Page 1 of 7